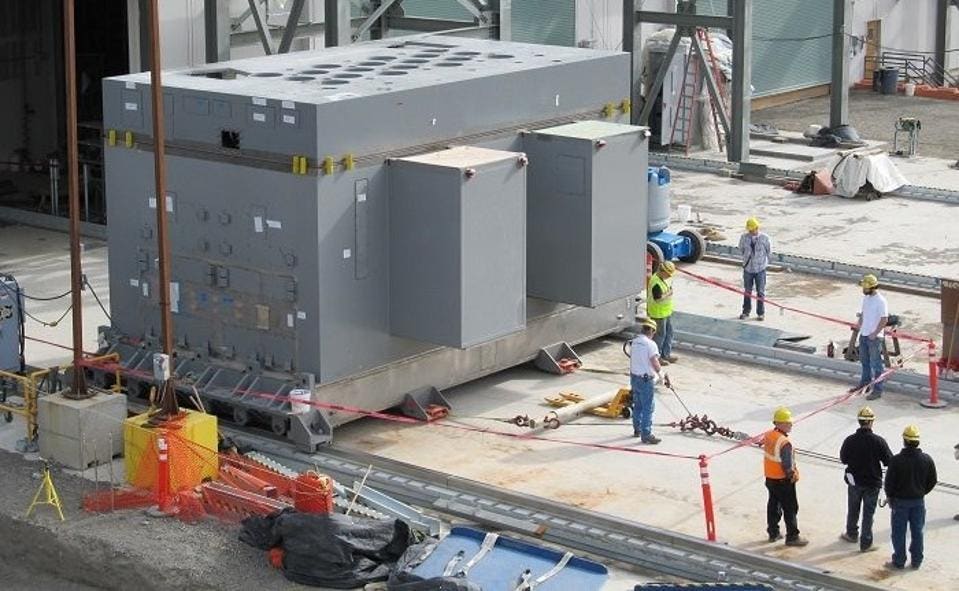 The Low-Activity Waste Facility melters, shown here during delivery and installation in 2010, weigh 300 tons and are designed to vitrify 5,000 gallons of low-activity waste each day — or 1.75 million gallons each year — during full operations. DOE

In 2023 the Department of Energy will begin transforming the toxic soup stored in tanks at the Hanford, Wash. nuclear waste site into a more storable glass form, according to the head of DOE’s Office of Environmental Management.

“We’re about to begin heating up the first WTP melter,” said administrator Ike White in a recent appearance at the National Cleanup Workshop. The Waste Treatment Plant melter is designed to heat nuclear waste and glass to 2,100º F so the mixture can be poured into stainless steel containers in a stabilizing process called “vitrification.” The containers will be stored on site.

Turning on the first melter topped the to-do list released early this year by DOE’s Office of Environmental Management, and with the New Year approaching, time is running out to check it off.

“This is another huge step forward for the program as Hanford gets ever closer to immobilizing our tank waste in glass,” White said. “It’s really transformational for a site that— and it’s been decades in coming.”

The melter DOE hopes to turn on by the end of 2022—and to operate for a five-year lifetime—was installed 12 years ago.

A graphic roadmap published by the cleanup contractor, Bechtel National Inc, suggests—perhaps without irony—that the road ahead is the steepest yet. Bechtel and DOE nonetheless expect to begin the operations phase, feeding low-level waste into the “vit plant” by December 2023.

The road to this point has not been without bumps. DOE expressed frustration with Bechtel’s progress more than a decade ago, with one official calling the firm “incompetent” and urging it be removed from the job. Just last year, former Energy Secretary Steven Chu accused Bechtel and other federal contractors of opposing funding for research into better solutions for nuclear waste so they could continue to collect massive payments from the government year after year.

“Everybody is on the same page with the vision for getting the cleanup done, developing a realistic and achievable approach for our most difficult challenges, like the high-level tank waste at Hanford,” he said.

“We’re treating Hanford tank waste on a large scale for the first time ever,” White said. “But developing a realistic and achievable approach for addressing the entire inventory of waste there remains a hurdle, something that we must overcome.”

Beginning in the 1940s, the tanks at Hanford received wastes from processes used to extract plutonium from spent nuclear fuel for use in nuclear weapons. The tanks continued to receive waste from equipment decontamination at the Hanford site into the 1960s, and in the 1970s it was discovered that some tanks seemed to be leaking.

Tip Jar: If you found value on this page, please consider tipping the author.

Next post: Obama, Trump Energy Secretaries Agree On Everything Until One Goes Too Far

An archive of stories from many publications since 1985. Stories here may be time stamped 10 days after their original publication. Links may be missing from older posts. These stories are presented here to keep information free and open to the public.

If you find value in this site, please consider tipping the author.

We Have Five Years To Save Ourselves From Climate Change, Harvard Scientist Says (Written in 2018)

The World Economy Is A Pyramid Scheme, Steven Chu Says

9 Things You Can Do About Climate Change

Should Be More Popular